A couple of years ago in a previous job my team and I came up with what we believed to be an ambitious proposal to our leadership. Things were moving pretty fast and it felt like we were going to get the green light soon. Around the same time we got a small change in leadership and I had to pitch our project to the new person in charge.

And then poof, he put the breaks on the project and we went through months of due diligence to get our final approval. I remember feeling highly frustrated at that time.

I know my stuff! Why do I have to explain everything all over again.

I was in the thick of it and taking things personally instead of trying to understand what was going on. But what the new person did was in fact quite appropriate and I was just facing one of the biggest issue that I’ve seen in communication.

Confidence in implicit knowledge will vary.

Below is the base picture I’m going to use to illustrate my thoughts. 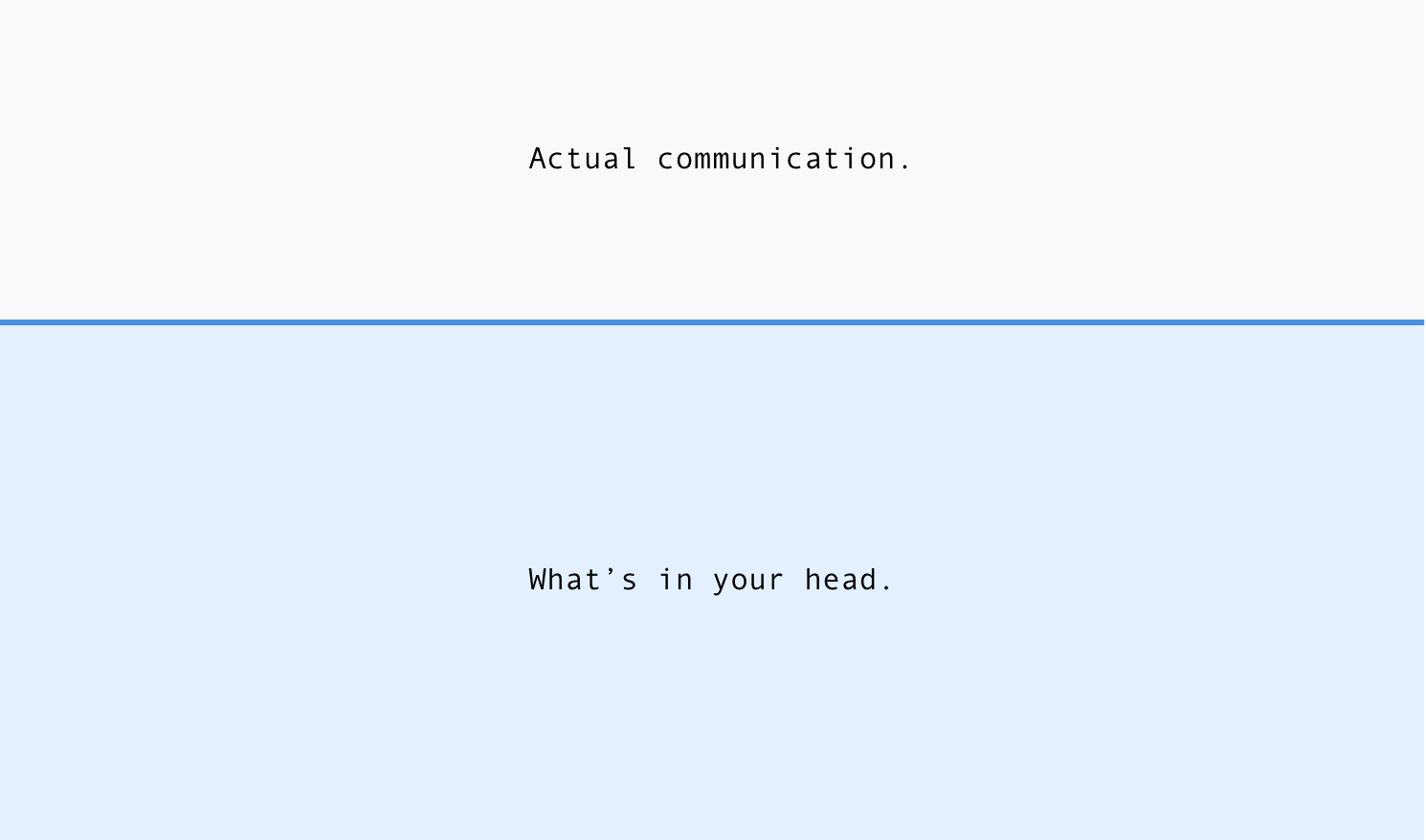 For instance I could write “Bitcoin is trash”.

That’s me expressing an idea. And it doesn’t look great as I’ve communicated very little to you. Using the diagram above, it’s akin to this. 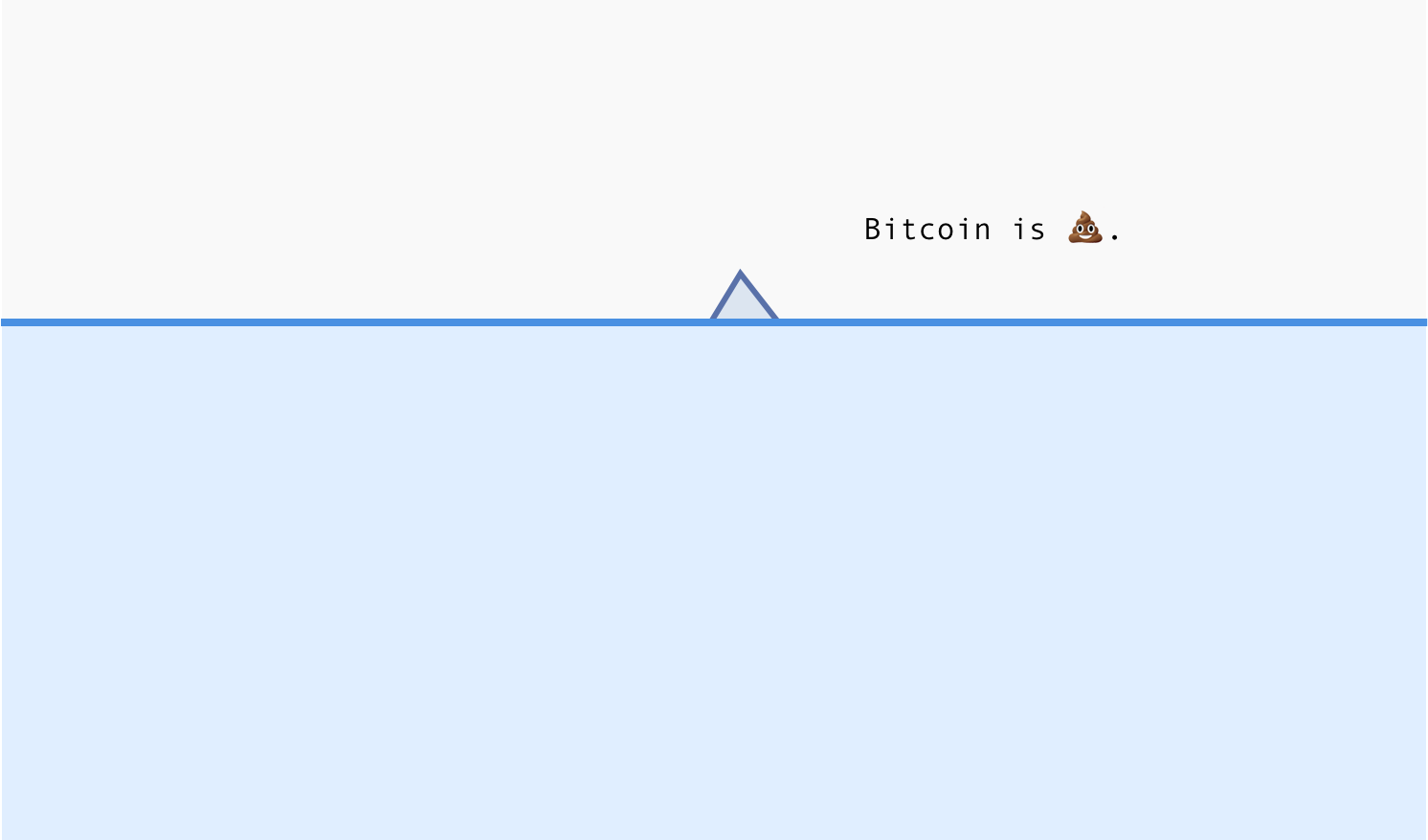 The scarcity of words doesn’t help you to understand how much research I’ve done to back up my statement so you probably perceive it as a tiny little thought that doesn’t amount to much — it’s quite a dumb thing to say by itself.

I could make a less provocative statement and express an opinion with a bit more flavour: “I think that Bitcoin is a great concept but right now it’s at the risk of becoming a bubble because too many people are jumping in for the sake of flipping assets instead of understanding what its original purpose.”

That’s a bit better now and it would look more like the picture below. 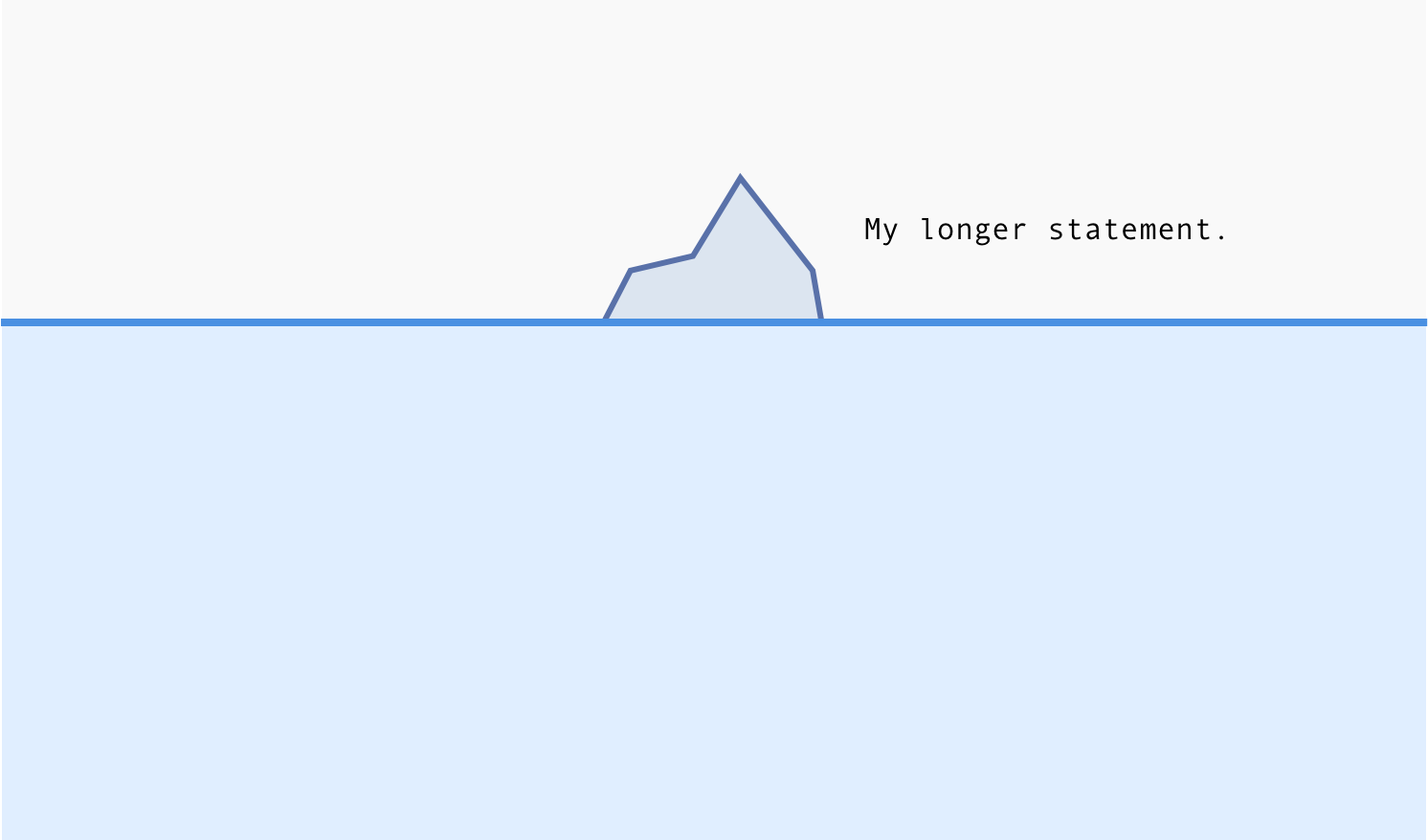 Now, based on what you know of me you’ll make an estimation of the bottom part. And this is where things get tricky because it depends on many things such as: 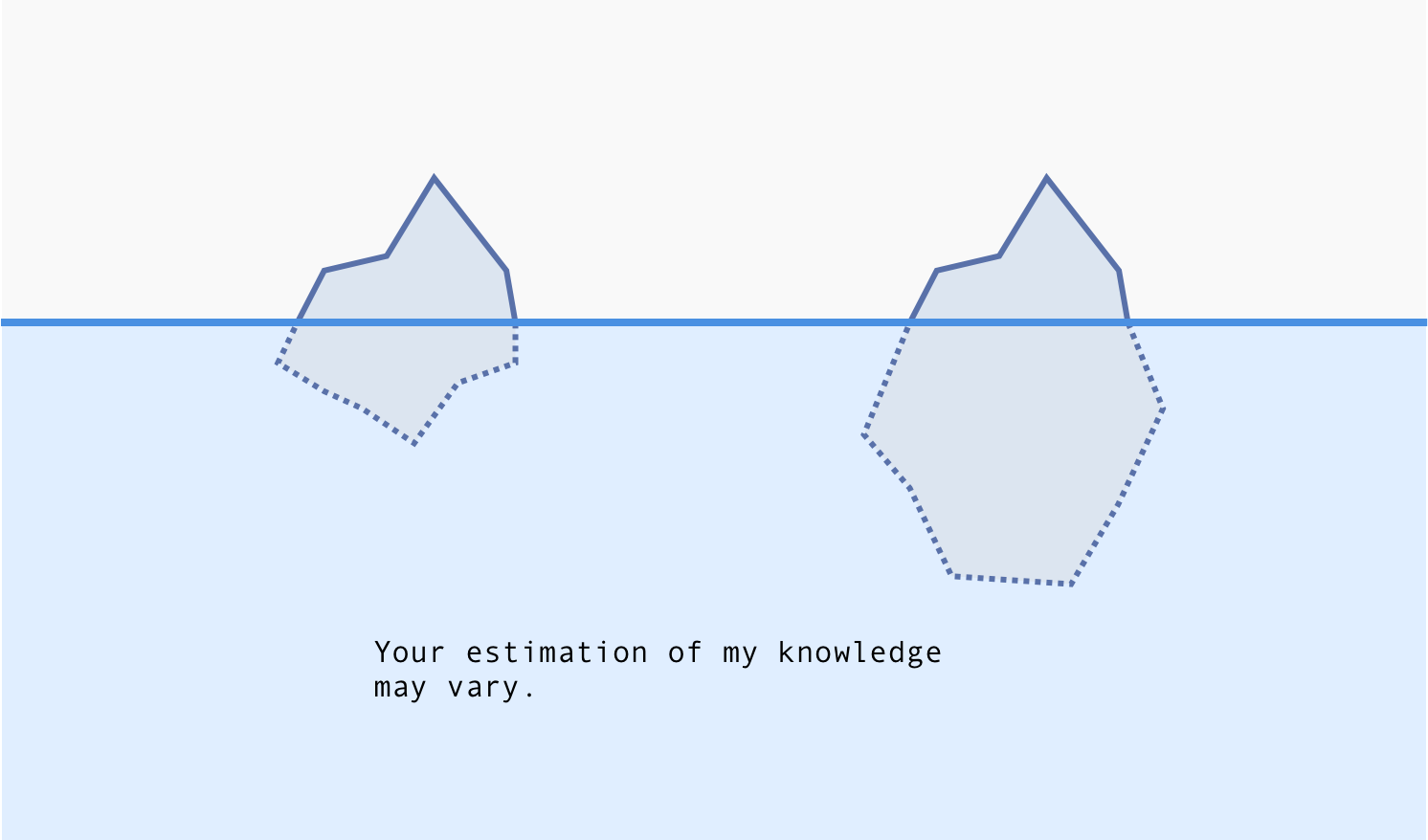 This is not exhaustive and many different factors can influence how a statement is perceived by others.

If we go back to my first story I can now illustrate what was happening. 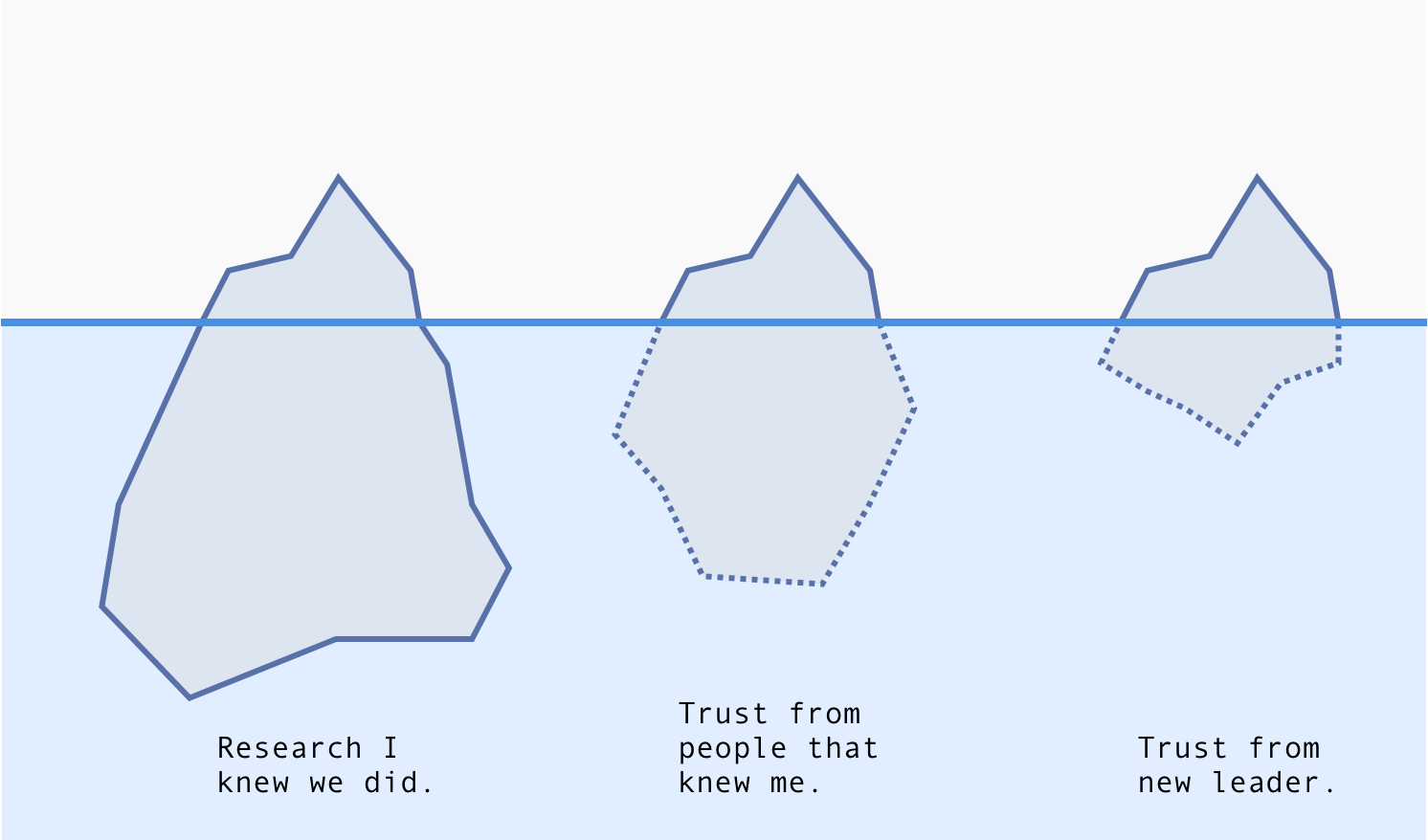 I felt I had a compelling case to present because of all the research I knew we did with the team. And I had built some trust over years with the people I worked with, allowing me to only communicate and show a certain amount of evidence to back up the plan.

But for someone new to the company the same amount of writing would equate to a smaller business case. And that’s absolutely normal. If they don’t know me or have not seen my previous work they can only judge what has been given to them.

In hindsight this makes total sense but at that time I was complaining about having to re-do a lot of work that I felt had been done before. In reality it wasn’t so much about re-doing work. It was about turning expected trust into shareable knowledge. (Additionally it was a great way to get new data to support the case). 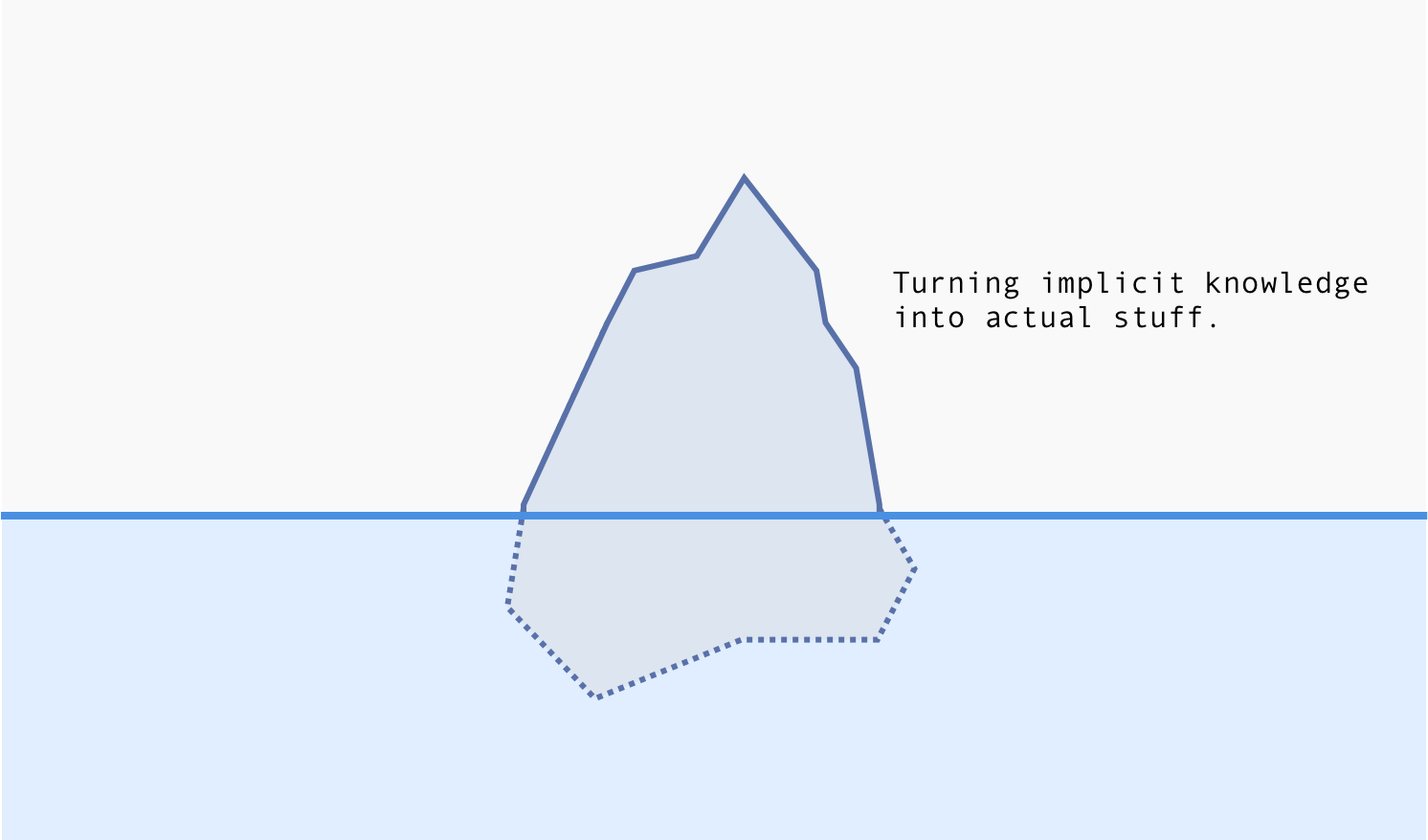 Collaboration is hard and I won’t pretend that I have a solution to eliminate communication issues. However there are still a few things that can be done to make this situation easier.

This sounds stupid to say but it’s hard to do well in practice. If you’ve been talking to users, or analyzed behaviour in your product it’s tempting to jump straight to drafting the solution. After all we just acquired the knowledge necessary to design a better feature, solve an experience problem or drive a new strategy.

The issue is that by doing so we work under the assumption that people know the work we’ve done to get there. But people have been busy too and they probably have no clue.

So write down interviews, analysis, competitive research as much as you can and as soon as you can. Even if you’re a solo founder working by yourself you should write things down because it’ll make it 100x easier to explain things to potential partners, mentors, investors or employees when the time will come.

There are tools that can help greatly with that. As an ex-Atlassian Confluence comes to mind right away but you can use Google Docs for the same purpose. I should also mention the folks at Dovetail which are building a great platform to help organize research data.

2. Write for a stranger.

This is goes hand-in-hand with the recommendation above. You should write assuming that the reader doesn’t have any prior context. This means in practice:

This is not about turning docs into complex knowledge bases. It’s simply about making it easier for a newcomer to learn. An easy way to do this is to ask oneself: “would a new person on the project get what I’m writing?”

Gut feel and intuition belong to the submerged part of the iceberg, and this is why they can make things harder to discuss. We could use our gut feel to discuss how good The Last Jedi is, or we could start by bringing up ratings from IMDB and Rotten Tomatoes and compare it to all the previous Star Wars films before engaging a debate.

This is not to say we will agree but the discussion is likely to be more enjoyable as we would have facts (visible, easy to reason with) to disagree on instead of just opinions (submerged, hard to estimate).

By the way, this is what we’re doing at Squadlytics and you can use our platform to easily get data about your productivity (shameless plug).

4. Find a trusted proxy that can support your ideas

If you’re in a rush and you really want to get approval for an idea you can try to find someone with greater trust and reputation to support your claims.

If I tell you that Tyxaquantum Propulsion is the future than you’ll (rightfully) think I don’t know what I’m talking about. But if Elon Musk says the exact same thing you might actually stop to consider it without needing further proof. So I just need to get Elon Musk to say a made up word to gain traction.

This of course does not scale well and I highly recommend investing in writing and sharing knowledge rather than convincing others to spread your ideas. After all, the more you can show, the easier it will be to turn skeptics into advocates.

Squadlytics keeps the pulse of your team by providing insights on your productivity tools. Act on issues early, make hard decisions and see the impact.

Our first roundup of the new year and we're back in full swing! Improvements to the Dashboard view and In-App Resources so you have fast access to docs and guides 💡

We take a look back at everything Tability in 2022. Thank you for your continued support!

This week we launched a new Teams feature in Tability, allowing you to organize your workspace and filter data into relevant groups. Try it today in beta!